An Interview with Mike Reese

My name is Mike Reese and I work in Birmingham, Alabama. I operate a restoration shop and have been in the piano rebuild / repair / tuning business for 43 years.

When did you start installing Wessell, Nickel & Gross parts?

The last 4 years—it’s been pretty intense—we’ve got a contract with a school in Jackson, Mississippi (Hinds Community College). They called me and said we have eight Steinway pianos we want to restore, and I said ok you got my attention. During my interview for them I saw what the pianos needed, and when I was asked if I was going to use genuine Steinway parts I said, “No, you’ll have to hire someone else for that—I know better!” So I took the first one back to them after I finished the restore and you know, with great skepticism, they sat down to the bench and she said, “Oh this plays 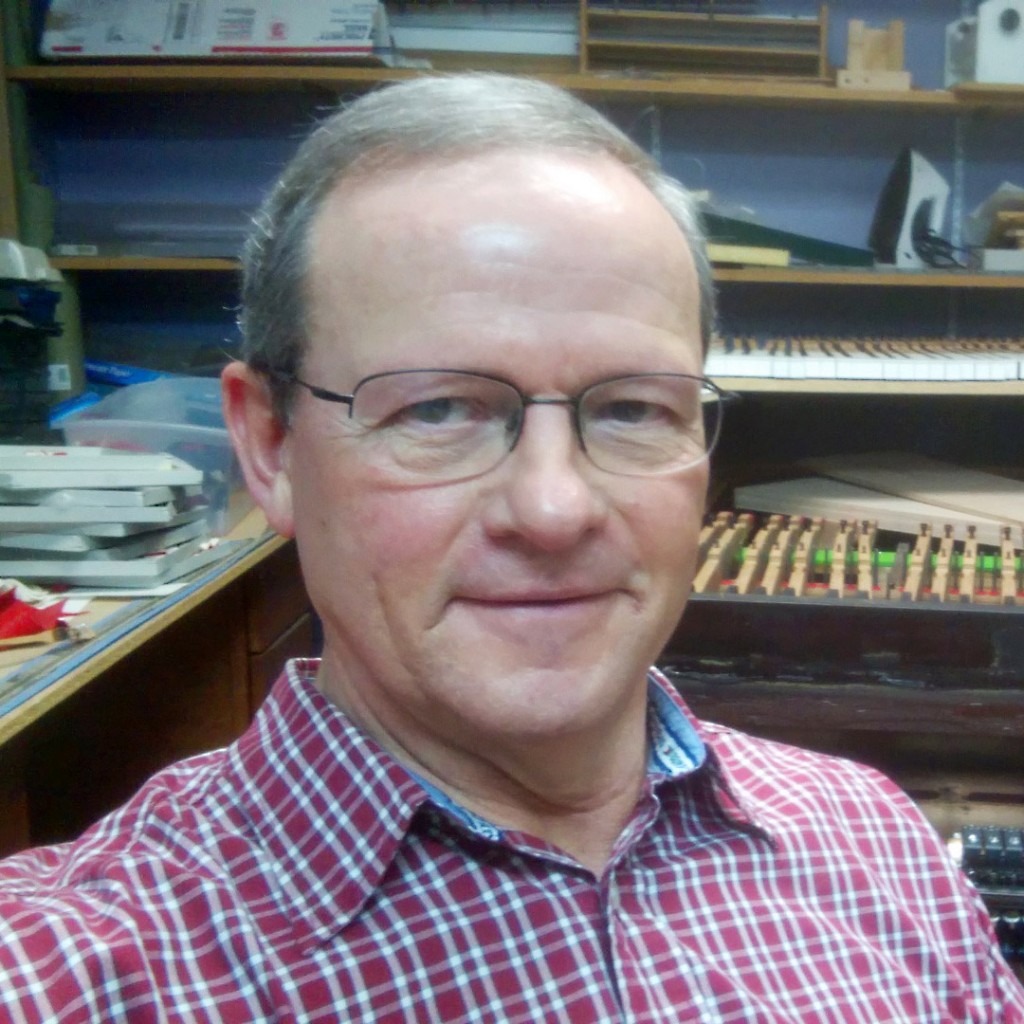 just like a Steinway!” and I said, “Well I was hoping for better than that, but I guess I’ll take it.” I’m working on the seventh one for them now and there’s four more to go, and they have been just overjoyed with the results.

What do you think of the materials that Wessell, Nickel & Gross uses?

Oh I love them, just recently I did a Baldwin SD10 for a gentlemen and he actually requested your parts. We did a whole new top stack for it, which was an experience. I bought it unassembled and put it all together myself. I tried to talk him into doing the back action but he thought, “No that’s good enough”, and sure enough, eight weeks after we put the main action in he calls me and says, “You’re right”.

What have the benefits of using WNG composite parts been for you?

Well the biggest advantage to me is I have so many options! I move capstans fairly routinely and being able to choose from various heel lengths and locations—that’s wonderful to me. We do quite a bit of geometry mods, and we automatically replace key pins and capstans with WNG ones.

Does using WNG parts save you time?

Probably after the fact they do, because they stay regulated remarkably well. As far as installing the parts, it takes me about the same amount of time, but I have so much more confidence in the fact that what I put in the piano is going to stay like I put it—the pinning, I don’t have to worry about the pinning.

What do you think about the WNG repetition?

They are beautifully engineered! That’s the magic—that’s what I preached at a recent seminar. Recently I had an experience with a dyed-in-the-wool Steinway artist. He unknowingly sat down to a B that I completely restored using WNG parts. It was obvious he was impressed, but I didn’t expect him to exclaim, “That’s the best B that I have ever played!” I removed the action from the cavity to reveal the secret. He was stunned, but it didn’t stop him from purchasing the instrument. I no longer “try to sell” these parts; I simply install them and explain the extraordinary results afterwards. Those people who harbor contempt prior to investigation are absolutely robbing themselves of a fantastic action.

What do you think about the carbon fiber shanks?

I love ‘em—I haven’t broken one, I can tell you that! Actually, I have an associate that works with me and he has a really bad reach in his hands over [keys] 87 and 88 when he slides an action out. He was pulling one out and he broke the hammer but the shank didn’t break and I thought, “Dear God, that’s strong!”

What problems would you say WNG has solved for you?

Maintenance. These pianos that I’m building for a college in Mississippi—I’d be scared to death putting in standard parts and putting the pianos over there because they have a horrible humidity situation in that building. It’s fun to put a product out there and drive away with a check in your hand and not worry about getting a phone call about something that’s not right.

How would you say WNG parts improved a piano that you’ve worked on?

The control factor is just out the roof. You know, the two words I hear almost all the time when someone sits down is, “Wow, is this responsive!” And then when they start to take it for a test drive, so to speak, and start seeing how softly they can play and how easy they can just kind of paint in a low bass note—you know, barely making it whisper—they’re stunned and say, “Man, there’s just so much control.”

Have you used any WNG tools and if so, which is your favorite?

Yes, the level stick is a thing of beauty. I use that routinely—I love it—lightweight, easy to monogram and put your name on it. I have all of the jigs for locating various things. The back action jigs are marvelous, I mean I love that you can use the guide rail and figure it out—all that’s a great set up.

Thanks again to Michael Reese for the interview!